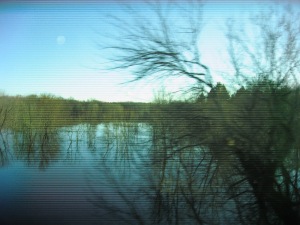 Here in New England, the spring equinox frequently coincides with the flooding of our rivers and streams.  The melting of giant piles of snow and torrential seasonal rains cause the rivers and streams to rise and basements are wet and roads close. This year, the flooding has been the worst I have ever seen in my 20 years here.  Trees have come tumbling down on houses as their roots can no longer hold on in the sodden soil.  Rivers and their banks have become lakes. All but one of the roads out of my neighborhood is closed.

I take the train to work and on the day of the worst rains, as I was walking around gigantic puddles and gazing in amazement at the streams running across roads and the furious falls roaring over rocks and dams, I found myself singing one of my favorite Goddess songs, Yemaya Assesu.  It is a happy, cheerful song praising Yemaya, one of the names of the great Ocean Mother Goddess of many parts of Africa and the African Diaspora.  While her traditional cultures and others may experience her differently, to me she has always been the all-embracing, all-loving, all-life-giving Mother whose affection  wraps itself around you in both your saddest and most joyful moments.

But yet, though an ocean Goddess certainly was evident in the water everywhere, what I sensed that day seemed more like the Destroyer-Creator Goddesses like Kali.  People were being washed away in rushing rivers.  Uprooted trees lined the roadways.  Animals were displaced from their homes and rushing for refuge on higher ground.  The water itself was powerful, pulling along with it branches and leaves as it raced over roads and fields, oblivious to all the obstacles humanity thought it had built on the land. Yet, I knew that in the weeks ahead, this water would also be a life-giver, making my own garden much more abundant, providing more food for the animals once they returned home, and nourishing the young saplings that would grow in place of the trees that were lost.

As the days passed, the waters receded only little, but a peace came over the land.  The rivers were still overflowing and the woods I walked through daily were waterlogged, but the water was glassy and still, reflecting the clouds and sun.  And, while the raindrops dripped down my face and soaked my shoes and clothes, I also felt the intimacy of the element of water. All life came from water, and we are made of water.  We all swim in water before birth and water or the lack of it is the difference between life and death for all of us.  Water is part of us at all times and we cannot escape it.  Water is truly like a mother from whom we are born and who is part of us always. I thought of a story from a long time ago.

I was living in New York City in the 1980s when AIDS devastated entire communities.  I worked for an agency that oversaw a program that sent older volunteers where they were desperately needed.  One place they were assigned was pediatric wards of hospitals that were full of babies whose mothers were not able to care for them because they were dying of AIDS. The hospitals cared for the babies as best they could, but none of the staff had time to simply hold the babies, sing to them, and rock them.  No one did, except for volunteers like ours.  At the time, no one really knew how AIDS was spread, so there was some concern that the volunteers might possibly contract AIDS from the babies, yet the volunteers were there for the babies, day after day. One day a reporter asked one of the volunteers if she weren’t afraid and she said “We’ve been through the Depression.  We’ve been through the Great War.  We’ll get through this.”

And I recognized Yemaya in that woman’s intense love of those babies who were not even her own family and her understanding that life will continue past this immediate crisis. And I saw Yemaya in the flood waters all around me.  Many living beings would not survive the floods – trees, small plants and animals, some people – but the impulse to life would continue. The intimacy of water would ensure that the landscape and the beings living on it might be different, but life would return.  Peace would come back to the land and new plants and trees would grow and baby animals and humans be born.  This is a new meaning of spring and the spring equinox for me, this intense love of rebirth and life that looks beyond what is happening at the moment and sees that with courage, faith, and love, life will continue.

Someday I will have my own flood, whether accident or disease, and my life will not continue.  But Yemaya will be there and life will go on, whether in my son and his children, or herbs I have raised and that have gone to seed, or words I may have written or said that meant something to someone and are remembered, like the quote from the woman volunteer.

This spring I celebrate those wild days that are Kali-like, but mostly I honor Yemaya’s devotion to the continuation of life that this season brings and I vow to express it in my own words and deeds the rest of the year.

Carolyn Lee Boyd's essays, short stories, memoirs, reviews, and poetry have been published in a variety of print and online magazines and blog sites and various anthologies. She explores spirituality in everyday life and how we can all better live in local and global community.